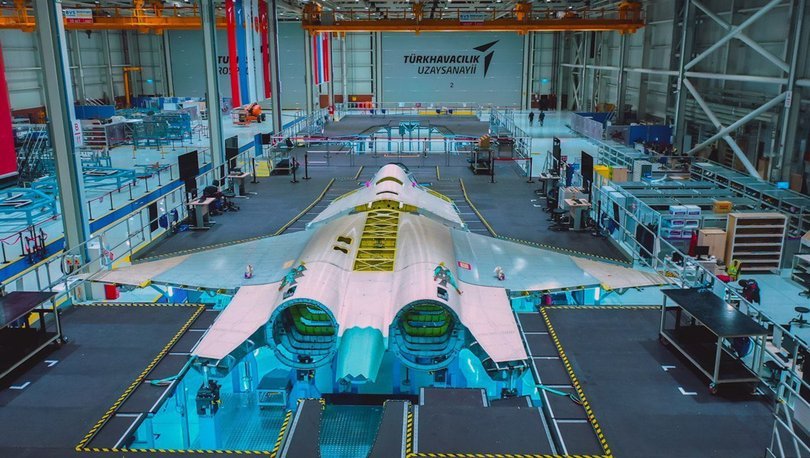 SHAFAQNA TURKEY – One by one, the critical phases of the National Combat Aircraft Project are being completed, with the Turkish Aerospace Industry (TUSAŞ) assuming the role of chief integrator under the coordination of the Defense Industries Board (SSB). While the process, which is the most critical step in the project, was running, the body parts were moved to the final assembly line.

In this regard, a solemn ceremony of launching the conveyor under the project was held at the TAI facilities with the participation of representatives of the Ministry of Defense, the State Security Service and the Air Force command.

While the front fuselage, front middle fuselage, wing module and rear fuselage of the prototype national combat aircraft have been delivered to the final assembly line, the assembly and system integration of the first prototype, which will be released from the hangar on March 18, 2023, with proving grounds trials, officially began.

“PROJECT THAT IS INDUSTRY ENGINEERING”

Evaluating the stage of the project, Ismail Demir, President of the Presidium of the Defense Industry, stated that as an aeronautical engineer he dreamed of being involved in such an aircraft building process, and used the following statements:

“I thank the Lord that we were able to take part in this process. From the day I entered my first university, I had a dream to live such a day. I hope we are at the beginning of the end. We are opening the first curtain of this work. Our work will be completed when our aircraft is successfully operational. We have lifted the curtain, but we still have a long way to go. You, the employees, will also have something to tell your children and perhaps even grandchildren. “We were part of the team that built Turkey’s first jet fighter.” You say.”

Expressing that the project is also a driving force that attracts the industry, Demir said, “We have energized our sub-industry and technologies related to dozens of sub-systems. I hope we all go on this journey together.” he said.

Emphasizing that the experience gained by the company’s employees will be distributed throughout Turkey, and products based on local technologies in many areas, not just in aviation, Demir said: “Our work is not finished yet, we have a lot of work. . This is a work of the heart, a work of the heart, by putting our heart, uniting our mind and intellect, together we will succeed in this red apple journey. I hope that together we will build the Turkish century. Under the leadership of our President, Mr. Recep Tayyip Erdogan, we will continue to work hard to achieve our goals for 2023.” said.

“HE WILL START NEW TESTS”

TUSAŞ Chairman of the Board Rafet Bozdogan stated that they aim to complete the project by March 18 and said, “We have reached a very important and critical threshold in the project. I hope we can meet the expectations of our armed forces very quickly. This is a complex and large project. Hopefully, on March 18, we will be able to pull the engine out of the hangar. Hopefully on March 18th we will see this project move out of the hangar with wider participation.” used phrases.

TUSAŞ General Manager Temel Kotil noted that they built Turkey’s first national combat aircraft under this project, for which they were honored, and said, “We really built this aircraft. In fact, we are not building aircraft, we are building a company that will produce aircraft. We have over 13 thousand employees. Amenities appeared almost immediately. This company now also manufactures all types of aircraft. After that, after leaving the hangar, he will proceed to ground tests and prepare for flight. ” he said.

While parts of the National Combat Aircraft prototype were transported to the final assembly line, Demir completed the assembly using an automatic drilling machine. After the meeting, the participants signed on the memorial plaque.

THERE ARE OTHER STAGES BELOW

It aims to include some 6,500 structural parts and 30 subsystems in the first prototype of the National Combat Aircraft Project, which prioritizes world-class production. It is assumed that the project will be developed in stages, and the number of subsystems will increase in the later stages of the prototype and mass production.

In 2023-2029, it is planned to start new stages (detailed design and qualification stage) of the national combat aviation project. In this process, it is planned to carry out the first flight, to produce a development aircraft and a full-size structural test aircraft. NEWS TURKISH