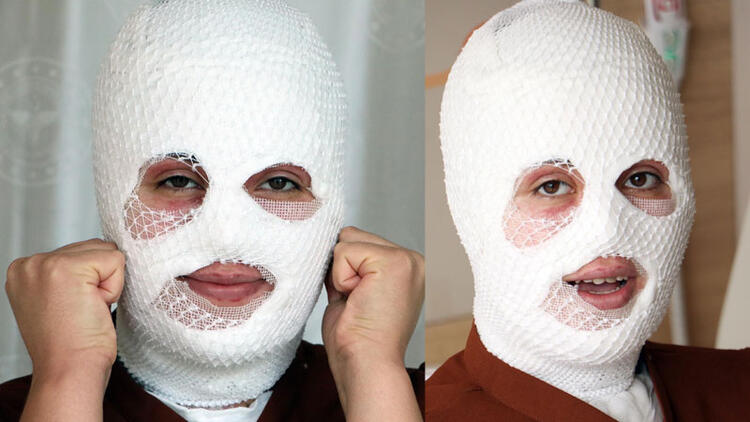 SHAFAQNA TURKEY-In Ağrı, the pressure cooker in which the eldest daughter of the Oztash family, Sevil Oztash, was cooking lentil soup for dinner, exploded with a loud noise. Oztaş, who was taken to the district hospital by his family, was treated at the burn center of the city hospital in Erzurum, where he was transferred from there.

Oztash, whose head was completely bandaged due to burns on his neck and face, said: “I used to cook at home on the stove. I put the pressure cooker on the stove to make soup. I went into the living room to throw coal into the stove. As soon as we got close to the stove, it exploded like a whistle bomb. First, the lid flew off, then the soup inside splashed onto my face. I was shocked right away.

I ran to the kitchen, trying to burn my face with cold water. I saw that the skin on my face began to fall out. Later, my grandfather, father and mother took me to Tutak State Hospital. From there we were sent to Erzurum. I have been treated in Erzurum for 10 days. I will cook again, but I will no longer use a pressure cooker because it is a very dangerous thing.

From now on, I will cook food in a pot.” Sinan Oztaş (41), married and father of 4 who accompanies his wife and daughter, said: “My daughter was passionate about cooking.

My daughter is in shock, she doesn’t know what to do. He washes his face with a towel. When we saw our daughter like this, we rushed her to Tutak State Hospital. After the first intervention, the doctors sent him to the Erzurum City Hospital. We are here 10 days.

My daughter is getting better every day. His health is also improving. My daughter will now cook, but definitely not in a pressure cooker. We have seen that a pressure whistle can cause very unpleasant processes. “My daughter could have died,” he said.