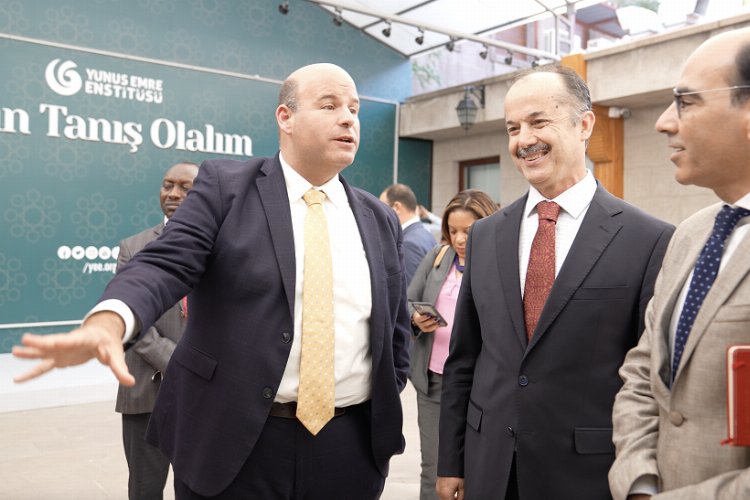 ISTANBUL (IGFA) – During the visit, where issues of cooperation that will promote cultural interaction and dialogue between countries were discussed, Yunus Emre Enstitusu, President prof. Dr. Şeref Ates talked about Turkish language teaching activities, cultural interaction activities and large-scale projects carried out by Enstitü on 6 continents.

Deputy Secretary of State Rosenzweig listened attentively to a musical concert at which famous works of the Turkic world were performed by dombra performer Arslanbek Sultanbekov and his team, and received information about instruments unique to Turkish music.

During a visit to the exhibition of the history of the Turkish language, where copies of the Orkhon monuments are exhibited, Deputy Secretary of State Rosenzweig met with the president of the Yunus Emre Institute, prof. Dr. Sheref Atesh accompanied them and told them about the Orkhon monuments.

Rosenzweig also met and negotiated with Ukrainian children who had settled in Ankara because of the war in Ukraine and learned Turkish and their families in the historic building of the Yunus Emre Institute in Ulus.

CULTURAL INTERACTION AND COOPERATION WILL BE EXPANDED

Yunus Emre President of the Institute prof. Dr. Regarding the meeting, Sheref Atesh said: “We focused on how to develop our cultural relationship between Mr. Ethan Rosenzweig and the Yunus Emre Institute and the US government. The partnerships that can be established with our Institute for scholarship holders from Turkey who go to study in the USA, especially Fulbright Scholarships, were appreciated. On the other hand, we discussed the possibilities of cooperation with government agencies, universities and non-governmental organizations in the United States to spread Turkish culture and teach the Turkish language in the United States.” used phrases.