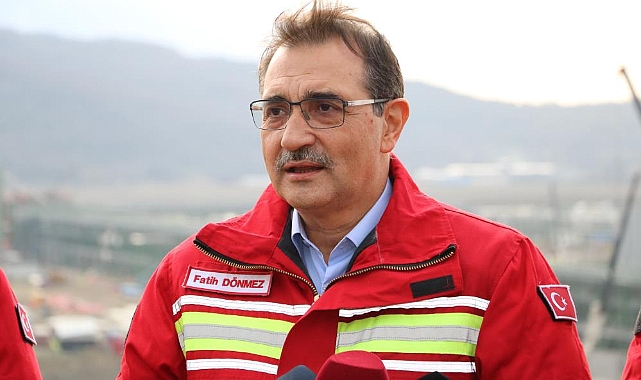 SAFAKNA TURKEY- Minister of Energy and Natural Resources Fatih Donmezstated that they intend to make Black Sea gas available to the country by the end of March.

Minister Donmez, Deputy Chairman of the SEP, in the area of ​​the Filyos natural gas processing plant Mount HamzaGovernor of Zonguldak Mustafa Tutlmazdeputies of the AKP Zonguldak Polat Turkmen and Ahmet Colakoglu and CEO of Turkish Petroleum Corporation (TPAO) Melih Khan Bilgin and received information about the work from the authorities.

Donmez in his statement here; Noting that they are located at the Chernomorskoye natural gas field, one of the largest projects, he said that construction is ongoing at the facility, which was started to process Black Sea gas.

“Our goal; Complete this project by the end of March and give our people gas from under the Black Sea.”

“At the field, the rate of progress associated with surface construction, which at that time was about 80 percent, has increased to 90 percent. From the side of the sea, construction work continues on more than 50 of our ships. Seabed assembly work completed. Now we are starting test work there. We have now entered our 100th year. As we said, our goal; If nothing goes wrong, we will complete this project by the end of March and provide our people with gas from under the Black Sea.”

Minister Donmez noted that the number of employees they hire naturally increases as work speeds up, and continued as follows:

“At that time, 7,500-8,000 people worked on land and at sea. At present, the number of employees on land is approaching 7,000, and we have about 2,500 employees at sea. We are now rapidly moving towards the band of 9-10 thousand. We are in the peak period. Now, test and trial studies of our work will be carried out and completed. Many specialists from Turkey and abroad will start providing more services in this area.”

“Feverish work has been going on for 2.5 years”

SEP Vice Chairman Doug also said that this area has been a feverish activity for about 2.5 years.

Stating that the gas would meet people after testing, Doug said: “I congratulate our minister, ministry, director general of TPAO and staff for their hectic work at this stage. I wish you success in your future work. Extracting this natural gas and feeding it into the national system, even by a national company, through TPAO, is a point that needs to be emphasized and expressed. said.

Emphasizing that the Black Sea gas will reduce foreign dependence on energy, Doug said: “This will provide us with a huge added value. This will present an opportunity that will provide us with a significant path in production. I congratulate our ministry on its contribution to the centenary of Turkey. I wish good luck to our people. Inshallah, may Allah give us the opportunity to open here in March 2023.” he said.

Later, Minister Donmez and his entourage conducted an on-site investigation.