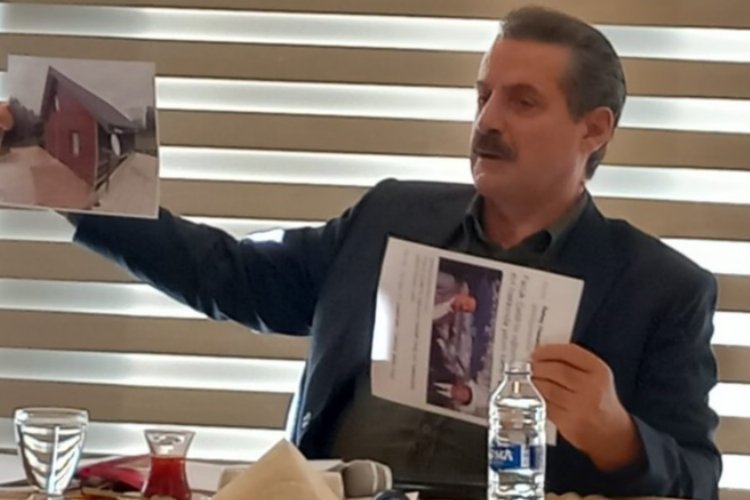 BURSA (IGFA) – Former minister Faruk Celik, who met with media observers from Bursa, made important statements about the agenda. Faruk Celik’s press conference was interpreted as “he started the war”, “he landed on the battlefield”.

Faruk Celik’s explanations are as follows;

In the next period, we will meet more often on the agenda of the country. In the media, it is extremely important to support and support local media, which are one of the most important pillars of democracy. However, I think that all of you would benefit from carefully reading the 3rd and 4th articles of professional printing principles, in general and in the local media. Understanding the media operating within this framework is a necessary understanding of the media. There should never be an understanding of the media that slander beyond morality and criticism and which, in my own words, “feed” for profit. Neither politics nor the press should have such an understanding; The government should not regulate social media. If you ask why the government made such a decision; I listen from all walks of life. I listen indiscriminately, both left and right. Random, unsubstantiated estimates are made. It’s called journalism. I believe that in Turkey it is impossible to get everything back on track as long as it is journalism and politics without responsibility. Eventually; Despite the fact that there are few of them in Bursa, there are those who are engaged in this business. There are people who have made slander a profession without source or proof, and they have made it a profession. Take the money, write it down. It’s called feeding. Criticize to the end. During my tenure, I have interacted a lot with the local press. Not a single journalist I have ever taken to court for criticism. If you criticize, you gain speed. I say it every time. The media should be free in this regard. He should have the right to criticize. But he must not encroach on his reputation and must not slander.

“I MATCH THE PRESIDENT FOR 40 YEARS”

It is constantly written and drawn that I will be the Minister of the Interior. As if there are reports that I set up headquarters in Ankara and began to quarrel with Suleiman Bey. Don’t do it guys. I have been working with Suleiman Bey in the office for many years, and vague, unflattering news about me. On September 21, I sent a message to Mr. Suleiman regarding the news that I want him to reveal who committed the deception. He also told me; He wrote that such things no longer excite him, that such things tire him and bring him happiness. Subsequently, an Alevi seminar was held. He invited me. We talked afterwards. Recently we went to Yusufeli with 4 ministers and our president. There were five of us, and I was sitting opposite our president. We talked about many things there. Things like “He didn’t hold your hand, didn’t look into your eyes” are written. Don’t lower the quality in Bursa. Don’t do deer. Don’t let your business fall into deer. I’ve been shaking hands with the President for 40 years. What if I don’t shake hands again? Please don’t take it personally. I don’t aim. I say don’t do it.

I am on the verge of success for the AKP in politics. When I was not in charge of the previous municipal elections, the president called me 15 days ago and said: “We are two points behind in Bursa.” “You are still at home,” he said. Give me the program, I’ll go. I walked on everyone’s feet for 15 days. I ran from door to door. I am on the side of Recep Tayyip Erdogan in the elections in 2023 with great success and a very good run to the final. He rendered great services to Turkey, with his mistakes, shortcomings and surpluses.

I am being asked questions about whether I am a candidate in 2023. Will I run for municipal elections? Those who ask about this do not understand politics. Even if he is in the AKP, it means that he has nothing to do with the party. Since there is a presidential election in 2023, this is the most important moment. After these elections, it is discussed what will be right. If you can’t get into the 2023 elections, what will you get?

They say that I traveled a lot with Mustafa Bozbey. He is my opponent. I met 4-5 times in my life. He also visited me 1-2 times during my ministry. We greet at events. what happened to it? In Ankara, I also meet people that you never thought possible. We have contact with everyone.

The Ministry of Agriculture issues licenses for vineyards larger than 5 hectares. This is the vineyard license we got. It has a 2-storey vineyard of 75 square meters, 150 square meters and a warehouse of 70 square meters. We became homeowners even without our intention. If I give a license to a friend from the municipality of Kestel, they will write that the state is doing you a favor. However, this is my right. At that time, I did not do this work from the municipality and received a license from the provincial agricultural department for an area of ​​6900 square meters. This is a public right. If you have more than 5 acres of land, you can apply to one of the provincial departments of agriculture, municipality, provincial department of environment and urbanization and get your right. But the center of the work is the provincial department of agriculture. You have been writing for months. May your goal be corrupted by Faruk Celik. What harm have I done to Bursa? Didn’t I work, didn’t I solve problems, wasn’t I sincere with people? I gave the biggest support to the metropolitan municipality. I will give the greatest support even if the district president asks the provincial president. The builder’s son came, he served as a minister for 11 years. It didn’t happen because I wanted it to, it was pure luck. I think so. Mehmet Ulger Bey became the candidate after the coup. As a result, he became a presidential candidate. None of them were chosen. So it’s not possible even if you wanted to. These are things of destiny. There are also examples in Bursa.

There is a house of 12 square meters with a kitchen. You would be ashamed if you saw this. The Sözcü newspaper presented it as a villa. Compared to hotels in Uludag. This building is licensed. You can go and see.