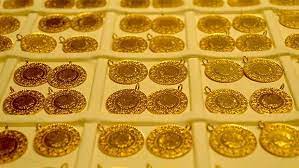 SHAFAQNA TURKEY – The ounce of gold in the spot market started the new week higher as prices for China’s easing of measures to combat the epidemic pushed the dollar lower, while the gram of gold hit a record high on the side of the gram of gold.

While the rise in prices per ounce of gold on world markets continues, new records are being set in grams of gold.

An ounce of gold on the spot market entered a new week with growth, while the dollar saw a downward movement amid investors’ expectations of an easing of epidemiological measures in China.

In the spot market, an ounce of gold tested above $1,809 in the first trading session of the new week. Thus, the focus was on the highest levels since July.

Growth in ounces led to new records in grams. According to calculations made using an ounce of gold and the exchange rate of the dollar to the Turkish lira, the value of a gram of gold exceeded 1.084 Turkish liras and reached its new peak.

According to Nicholas Frappell, Head of Corporate Markets at ABC Refinery Global, while the latest US employment data has created a more negative environment for gold, on the contrary, gold has risen on the theme of rising from the bottom.

The Bloomberg Dollar Index remains weak, shedding 0.4% this morning after a 1.3% overall fall over the past week.

Chinese authorities have eased restrictions imposed in connection with COVID-19 in Shanghai and Hangzhou, accelerating the process of economic recovery. Following nationwide protests against the crackdown on last week’s Covid zero filing, a commitment to carry out PCR testing at entrances to open-air public spaces such as parks and public transport use in Shanghai, China’s financial hub. China, has been canceled from today.

A statement on the matter on Sunday said the measures would continue to be updated in line with national policies and the current situation.