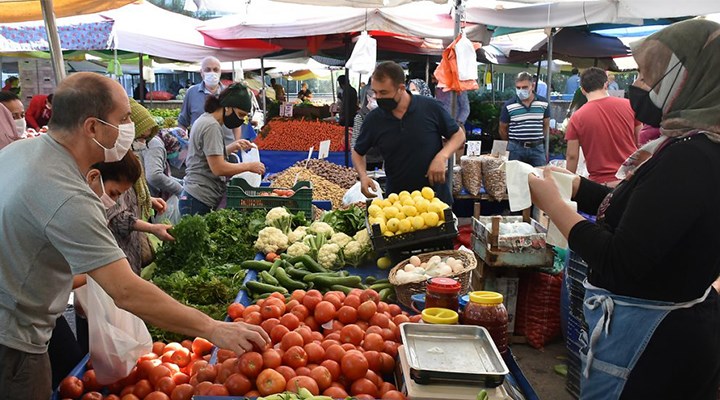 SAFAKNA TURKEY – In November, consumer prices rose 2.88% m/m and 84.39% y/y in November, according to TUIK. Thus, after 17 months of continuous inflation growth, its limited reduction was recorded. I think I hear your objection: “Never go down, prices keep going up.” You’re right, the 2.88 percent increase in inflation over the past month means that the purchasing power of a person whose income remains the same is declining at such a rate. What is happening is not a drop in prices, but just a slight slowdown in growth. When calculating inflation for the last 12 months, inflation of 3.51 percent in November 2021 has been deactivated and replaced by 2.88 percent. At the end of this process, there was a decline of 1.12 percent, that’s all.

Let’s explain this with an example. One car leaves at 90 km/h (this is annual inflation), another car follows it at 50 km/h (this is your annual increase in income). As a result, the distance gradually increases (which represents an erosion of your purchasing power). If the vehicle in front slows down slightly and drops to 85 km/h, the gap between the two vehicles will continue to widen. In other words, your purchasing power is gradually decreasing. However, the distance between them opens a little slower.

For example, US monthly inflation in October 2022 was 0.4 percent. However, annual inflation decreased from 8.1 percent to 7.7 percent. As you can see, the monthly increase of 2.88% in our country is still more than 7 times higher than in the US.

WHY IS INFLATION STOPPING?

So why is there a relative slowdown in inflation? First, there is a moderate dynamics of prices for raw materials and energy carriers in the world. As a matter of fact, this can also be seen in producer prices, showing a limited monthly increase of 0.74 percent. In November 2021, D-PPI monthly inflation was 9.99 percent. Thus, the growth over the past 12 months has decreased from 157.69% to 136.02%.

Secondly, the desire to maintain a stable dollar exchange rate at any cost curbed the permeability of inflation through the exchange rate.

Third, consumers try to protect themselves from inflation by moving their purchases forward. However, the effect of wage increases in July is gradually weakening, and demand is weakening. Fourth, there is a serious slowdown in lending. Both measures to rein in loans and the unwillingness of banks to lend at an interest rate below the inflation rate lead to this result. While the increase in credit card spending is 103.3 percent in line with inflation, consumer loans show a very limited growth of 34.6 percent. This naturally weakens the demand for goods and services. The fact that the economy shrank by 0.1 percent in the third quarter of 2022 compared to the second quarter is indicative of a slowdown in demand. Most likely, in the last quarter of the year we will witness a more significant economic downturn.

The total weight of the three main items of food, housing and transport in the consumer’s consumer basket is 56.2 percent. However, as their purchasing power declines, people can spend less on education, health, clothing, and footwear. The weight of the three main groups of expenses is increasing. Among our low-income citizens, this figure already exceeds 70 percent. Annual inflation is 107 percent for transport and 102.6 percent for food, far exceeding the 84.39 percent increase in consumer prices. Housing, on the other hand, seems to be in line with inflation at 82.9%, but rent increases, which are a major burden on low-income people, are well over 100%. Especially if you had to rent a new house for a year, you are faced with exorbitant price increases. Thus, the inflation experienced by our low-income citizens is much higher than the general figures.

Get ready now! In the coming period, we will have to deal with the demagogy of government representatives, especially through Erdogan and Nabati, that the spine of inflation has been broken and this problem has been overcome. Because in December 2021 there was a record monthly inflation of 13.58 percent with the effect of an exchange rate explosion, and in January 2022 – 11.1 percent. When those rates run out, 12-month inflation will fall below 60 percent, technically speaking, with a base effect. However, this “inflation monster” does not mean that it is defeated, but that it continues on its way with a very fast acceleration.

If wage growth does not keep pace with inflation, compensating for past losses, impoverishment in our country will continue. Pictures of picking up goods from the market, sending students to school with an empty lunch box, and stories of them going to bed hungry will become commonplace.

Let’s make this calculation: if the monthly price increase stabilizes at the level of 3%, the annual inflation will still remain at a very high level of 42.6%. For you, I have calculated the annual inflation rate that will be announced every month until the election if inflation is 3 percent per month. So let’s be ready for the demagogues and never stop reminding us that those who run the economy do not really have plans to prevent inflation. In addition, efforts to keep the exchange rate constant with the Central Bank’s 9 percent discount rate could face a new currency attack at any time, and inflation could spiral out of control again.

As you can see from the table, inflation has gradually declined every month since February 2023. However, this is the arithmetic result of the inflation rate in 2022, which was 4.81 percent, 5.46 percent in March, 7.25 percent in April and 2.98 percent in May. This is not the result of a consistent policy of curbing inflation.

Let’s say the following scenario occurs. Let’s not forget that we will still be battling with an annual price increase of around 43 percent, well above the 19.6 percent inflation rate in September 2021, when the interest rate cuts began.