SAFAKNA TURKEY – A study by the Center for Economic and Social Research at Bahcesehir University (BETAM) found that home ownership in Turkey has declined significantly over the years.

According to the information contained in the BETAM policy brief, during the period 2010-2014, when the share of housing ownership did not decrease, the real price of a housing unit increased by 28.6 percent.

Noting that despite this increase, the number of homeowners did not decrease, the note stated: “This is due to a strong increase in real household disposable income due to strong growth over the same period” and goes on:

“In fact, the ratio of the average current level of house prices to the average disposable income of the population increased by 16 percent in just four years, and the average annual increase was 4 percent.”

The number of homeowners has been declining since 2014, according to the study. 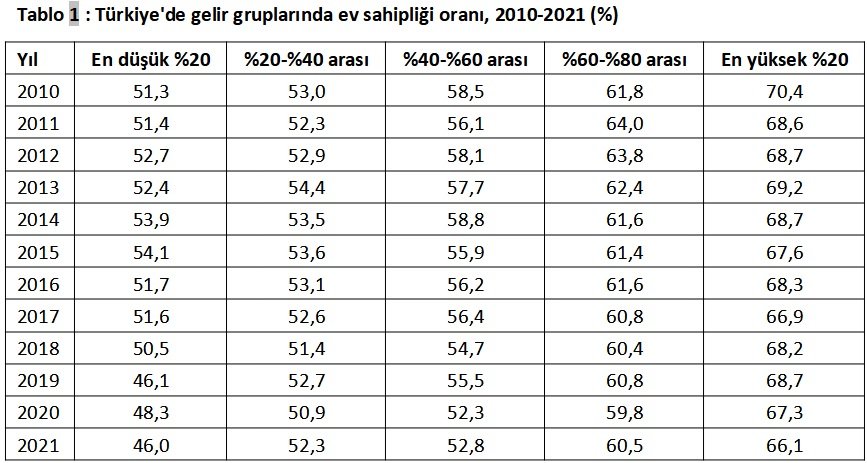 INCOME OF CITIZENS DID NOT INCREASE AS HOUSING PRICES

The study shows that while economic growth has averaged just over 6 percent over the past two years (1.8 percent in 2020, 11 percent in 2021), home ownership continues to decline as household income growth remains well below housing growth. . price rise. It was emphasized that this was not surprising.

In a study that looked in detail at home ownership by income group, it was noted that at the end of 10 years, the lowest income group experienced a major decline in the number of homeowners.

“However, this decline is the end result of very strong volatility. What is striking about this income group is the significant increase in home ownership up to 2015: homeownership increased from 51.3 percent to 54.1 (about 3 percentage points).”

HOME OWNERSHIP IN TURKEY IS HIGHER THAN GERMANY AND SWITZERLAND

On the other hand, the level of home ownership in Turkey was compared with Hungary, Poland, Romania, Mexico, Chile, Germany and Switzerland.

“This comparison clearly shows that there is not always a valid economic law, since the higher the income per capita, the greater the home ownership,” the study says.

THE HIGHEST HOUSING PROPERTY IN ROMANIA, HUNGARY AND POLAND

The countries with the highest number of homeowners were respectively Romania, Hungary and Poland.

It has been stated that although the per capita income in these countries is similar to Turkey, the home ownership rate is much higher than in Turkey.

The common feature of these three countries is that they are former socialist countries.

“The sale of public housing to residents on the cheap after the establishment of the socialist regime in Romania explains the very high level of home ownership in this country – 97.3% in 2010.

It can be predicted that the high levels of home ownership in Hungary and Poland will be the result of a similar development.”