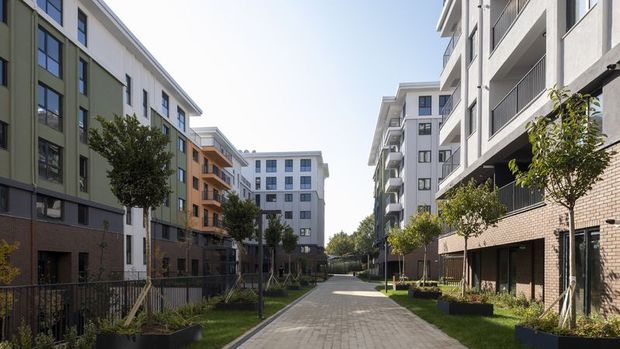 SAFAKNA TURKEY – As part of the new housing campaign, middle-income people will be offered a loan for a period of 15 years, starting at 0.69 percent.

Environment, Urbanization and Climate Change Minister Murat Kurum and Treasury and Finance Minister Nureddin Nebati have announced the details of a housing campaign for middle-income people.

With the assistance of the Ministry of Treasury and Finance, an income-based payment plan will be offered for the first 3 years of the campaign called the New Home Program.

The funding to be provided under the program will be for zero housing units.

Purchased houses will not be sold for 5 years.

Individuals who will benefit from the program must not have a residence and must not sell a house in the last year in the province where they will buy a house.

In addition, our citizens who want to buy a house in the provinces of the 1st region (Istanbul) and the 2nd region (Ankara, Izmir, Antalya, Bursa, Mersin, Mugla) must reside in these provinces in the past year. 3. In our provinces in the region, the residency requirement will not be requested.

Purchased residences will not be sold for 5 years.

Minister Nabati said that the right to participate in the campaign remains with those who own land, land, houses and real estate in rural areas.

Interest rates will start at 0.69 percent.

The minimum down payment rate is set at 10 percent in all regions.

Interest/earnings rates will apply, with rates starting at 0.69 percent, providing financing with a maximum maturity of 15 years.

The Ministry of Treasury and Finance will take over a certain portion of the monthly payment due during the first three years, provided that it is repaid before the full repayment of the loan.

Under the program, citizens will be able to use housing loans in 3 different stages.

First, finished residences. Secondly, houses completed at a certain rate and meeting the criteria for bank lending. Third, the houses to be built.

In the first two cases, if the conditions of residence and the applicant are assessed as suitable for lending by the relevant bank, the funding opportunity and the contribution of the ministry will be provided under the Program.

In the third case, which covers newly started projects, the main criterion will be the assessment of the housing project, of which the house is a part, as suitable for bank lending.

In this case, in order to include the project in this program, the bank will need to conclude a surety agreement with the contractor on a project basis. Thus, it will be possible to use housing loans without laying the foundation for construction.

In this context, contractors who enter into surety agreements with banks and undertake to build houses under the Program will initially be offered access to financing in the amount of 25 billion liras with a KGF guarantee backed by the Treasury.

Minister Nabati said in his speech that measures would be taken against possible exorbitant price increases. Nabati said the following about this:

As a Ministry, we have been closely monitoring and evaluating housing prices for a long time.

By monitoring the rise in prices in the real estate sector, a thorough assessment will be made of the persons who negatively influence the balance of supply and demand, and those who act as an intermediary between these persons. Individuals found to be unfairly raising prices will be turned over to the relevant departments to take the necessary action.

I would like to make it very clear that we will not tolerate pricing that differs from market realities during this period when we are fighting inflation to improve the well-being of our citizens.

The first year fee of 1 million TL will be 4,410 TL with support

With the support of the Treasury, the monthly payment will be 4,410 Turkish lira in the first year with a housing of 1 million Turkish lira. In the second year, it will be applied in the amount of 5 thousand 400 Turkish liras.

The campaign starts on January 16th.

After Minister Nabati, statements were made by the institution of the Minister.

In the first phase of the new campaign, the institution said that exactly 100,000 families would own a home in a few months.

The institution used the following statements:

Our citizens will be able to buy ready-made houses from all over our country.

He will be able to benefit from completed and current residences at a certain rate.

He will be able to benefit from new projects that have signed a guarantee agreement with banks.

Thus, control over the citizen’s project will be ensured. The campaign will include the following projects: projects developed by our General Directorate Emlak Konut, projects of our companies belonging to GYODER, İNDER, Konutder, İmkon and the Turkish Contractors Association, as well as all large and small housing projects produced by companies in all of our 81 provinces ; they will be involved in this process if they meet the technical and financial criteria.

As part of this campaign, our contracting companies will support our citizens in the amount of up to 5 percent of the value of the homes they sell.

From January 16, our citizens will be able to follow all the events and details of our “New Home Campaign” on the website that we will create.

We will establish a commission that will include representatives from our Ministry of Treasury and Finance, the Ministry of Environment, Urbanization and Climate Change, CMB, BRSA and valuation institutions.

This commission will work on the issues of control and pricing determined by companies through their technical and financial audits. Here, too, the main criterion will be the conclusion of the examination.
Thanks to this commission, which will perform the functions of the audit; We not only guarantee the implementation of the project, but also provide the necessary financial support to our companies. On the one hand, we will increase the supply of housing, and on the other hand, we will protect our middle-income citizens by ensuring price stability during the campaign, and we will bring them home.

Regardless of the level of inflation or changes in income over 15 years, installments will not exceed 40 percent of family income; in many installments, it will even fall to the level of 25-30 percent.