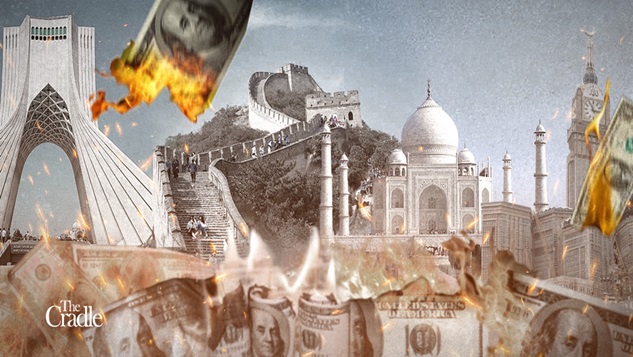 SAFAKNA TURKEY – US trade restrictions and sanctions against a number of countries, including Russia, Iran, Cuba, North Korea, Iraq, and Syria, have proven politically ineffective and backfired on the Western economy. As a result, the US dollar is losing its role as an important currency in the settlement of international trade receivables.

More than 24 countries have been subject to unilateral or partial trade sanctions for failing to comply with the policies of the US and other Western powers. However, these restrictions have become detrimental to the economies of the G7 countries and have begun to affect the hegemony of the US dollar in world trade.

Geopolitical analyst Andrey Korybko told The Cradle that the West’s outrageous fines and the confiscation of Russian assets abroad have undermined faith in the Western-centric paradigm of globalization, which has been on the wane for years but still manages to maintain a global standard.

Korybko, “Emerging multipolar countries have responded to these economic and financial shocks as being more democratic, egalitarian, non-Western oriented, and globalizing. only one BThey have accelerated their de-dollarization and diversification plans away from the horse-centric model.” he adds.

The International Monetary Fund (IMF) recorded a decline in central bank dollar reserves from 71 percent to 59 percent in the fourth quarter of 2020, reflecting the weakening influence of the US dollar on the global economy.

And the trend continues to get worse: evidence of this can be seen in real data: bank receivables in dollars fell from $7 trillion in 2021 to $6.4 trillion by the end of March 2022.

According to the IMF’s Currency Structure of Official Foreign Exchange Reserves (COFER), the percentage of the US dollar in central bank reserves has declined by 12 percent since 1999, while the percentage of other currencies, especially the Chinese yuan, has shown an upward trend with a rise of 9 percent this year. period.

The study argues that the role of the dollar has diminished due to competition with other currencies (including the introduction of the euro) that bankers use for international transactions, and concludes that if dollar reserves continue to decline, this will affect both the currency market and and in the bond market.

The Reserve Bank of India (RBI) set up a rupee exchange facility last July to boost global trade and Indian exports, preventing pressure on the Indian currency following Russia’s invasion of Ukraine and US and EU sanctions.

Iran has also offered the Shanghai Cooperation Organization (SCO) an SCO currency similar to the euro for trade within the Eurasian bloc to control the weaponization of the US dollar-dominated global financial system.

“To this end, they should use multilateral institutions such as the BRICS and the SCO and related institutions such as money pools and possibly the creation of a new currency based on their own basket of currencies to mitigate the effects of trade restrictions,” Korybko said.

The International North-South Transport Corridor (INSTC) is being revived by Russia and Iran as a “sanctions-violating” project. INSTC has again attracted attention after the “hellish sanctions” imposed by the West on Moscow. Russia is currently finalizing rules that will allow Iranian ships to navigate freely on the Volga and Don rivers.

INSTC is planned as a 7,200 km multimodal transport network, including sea, road and rail lines for the transport of goods between Russia, Central Asia and the Caspian regions.

On December 30, 2022, Russian President Vladimir Putin and his Chinese counterpart Xi Jinping held a video conference and reported that Putin’s bilateral trade between the two countries has reached a record high with a growth rate of 25 percent, and trade volumes have increased. That momentum should reach $200 billion next year, despite Western sanctions and a hostile external environment.

Putin noted that between January and November 2022, there was a “significant increase in trade volumes”, resulting in a 36 percent increase in trade to $6 billion. Although the details of the bilateral trade agreement were not disclosed during the video conference, it is likely that the $200 billion bilateral trade target, if achieved next year, will be achieved in Russian rubles and Chinese yuan.

This is because Moscow and Beijing have already established a cross-border interbank payment network similar to SWIFT, increasing gold purchases to ensure greater stability of their currencies and signing national currency exchange agreements in various regional and bilateral agreements.

In addition, both Russia and China seem to have foreseen the possibility of seizing US financial assets, and in 2014 they cooperated on energy deals to strengthen strategic trade ties.

In 2017, China’s Belt and Road Initiative (OBOR) introduced a pay-against-pay system in rubles and yuan. In 2019, the two countries signed an agreement to exchange dollars for national currencies in cross-border transactions, converting their $25 billion worth of trade into yuan (yuan) and rubles.

Independence from the dollar

This shift has reduced their interdependence on the dollar, and just over half of Russian exports are now paid in US dollars, down from 80 percent in 2013. Much of the trade between Russia and China is currently conducted in local currency.

According to analyst Korybko, Significant progress has been made in reducing dependence on the US dollar in international trade., but there is still a lot of work to be done. He states that the US will simply not accept a challenge to its financial hegemony and will likely take action to protect it.

“Therefore, the US is expected to seek to enlist the support of key players by offering or promising preferential trade deals, as well as escalating tensions between Russia, China, India and Iran through information warfare. possibly threatening to tighten the secondary sanctions regime as a “deterrence”.

These agreements allowed the Russian Federation to carry out more than 70 percent of its trade in rubles and other regional currencies. 183 million inhabitants and The EAEU, with a GDP of over $2.2 trillion, poses a major challenge to Western hegemony over global financial transactions.

Iran and the EAEU recently completed negotiations on the terms of a free trade agreement covering more than 7,500 product categories. When the next Iranian year begins on March 21, 2023, a market with a potential size of $700 billion will open up for Iranian goods and services.

In international trade, especially among the BRICS countries – together they account for 41% of the world’s population, 24% of GDP and 16% of trade – the trend towards the abolition of the dollar has gained significant momentum in recent years.

In 2015, the BRICS New Development Bank recommended the use of national currencies in trade. Four years later, the bank provided 25 percent of its $15 billion local currency bailout and plans to increase it to 50 percent in the coming years.