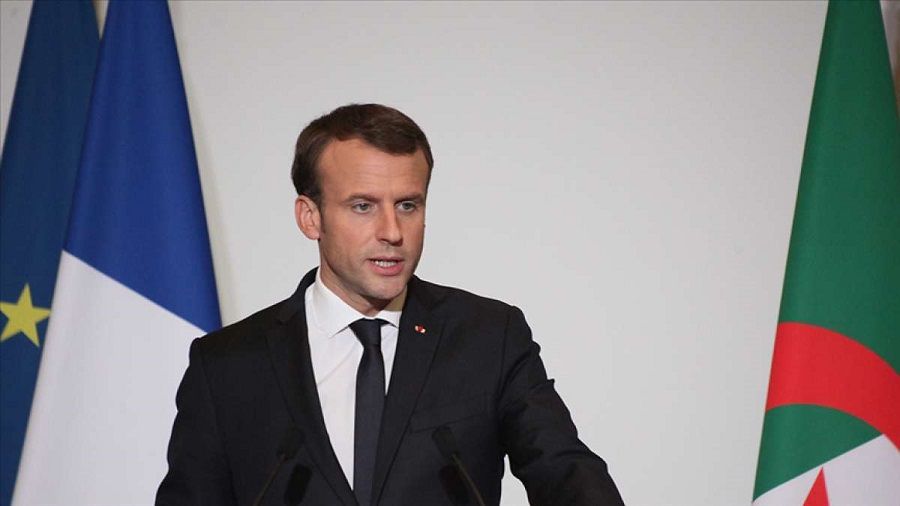 Macron’s three-day visit to Algeria coincides with a period when the countries of the European Union (EU) are experiencing an energy crisis due to the Russian-Ukrainian war, and Algeria has chosen Italy as its biggest partner in Europe in this area. energy.

French authorities say Macron’s visit to Algeria, which will begin today and run until Saturday, August 27, is aimed at “revitalizing relations between the two countries.” Algerian authorities declined to comment.

When Russia did not provide natural gas, it requested additional gas from Algeria

Notably, this visit by Macron also coincides with a period of profound transformation that Algeria has begun in both domestic and foreign policy. In fact, in the shadow of tensions between Moscow and EU countries following Russia’s war against Ukraine, Algeria has begun to forge new economic partnerships outside the EU and especially France.

The pressure to put the gas issue on Macron’s agenda comes through news published in Europe. Fearing a Russian gas shutdown and a gas shortage, Macron is being asked to persuade Algeria to pump additional gas through Spain.

Crisis between Algeria and France

Macron, who made a brief visit to Algeria in 2017 lasting a few hours, will visit the country today for the second time.

According to the French President, Macron will visit the city of Oran, located in the west of the country, after contacts in the Algerian capital.

Macron, who caused one of the most dangerous tensions between the two countries with his diatribes against Algeria in statements published in the French newspaper “Le Monde” in October 2021, stated in his statements that “in Algeria, the military-political system prevails and the official The country’s history has been completely rewritten.” argued that it was not based on facts and was built on hostility towards France.”

What Macron said about Algeria:

“The building of Algeria as a nation is a phenomenon worth watching. Did the Algerian nation exist before French colonization? That is the question. (In Algiers) There used to be colonies. I was fascinated by the fact that Turkey could completely forget the role she played and the dominance she established in Algeria, and that perfectly explains that we are the only colonizers. The Algerians believe in it.”

After the main determinants of the normalization of relations by Algeria, it is clear that Macron will have to say more to convince the Algerian side of his new vision.

After that, the President of Algeria condemned France in a written statement and said: “Macron’s statements are an unacceptable insult to the memory of more than 5 million martyrs who resisted French colonialism.” used words.

Tebbun, in a statement he made during this period to the German magazine Der Spiegel, “I will not attempt to communicate with Macron. Even if he tries to contact me, I will not answer because he has spoken out against an entire nation.” he said.

Jean-Yves Le Drian, then French Foreign Minister, made several visits to Algeria to restore relations between the two countries.

Softening of relations between the two countries began only after the re-election of Macron, when he was congratulated by his Algerian counterpart Tebbun.

Much has changed since the crisis

Algerian President Tebboun expressed his country’s interest in joining the BRICS group when he spoke to the press a few weeks ago.

Tabbun; He said they have met most of the conditions for joining the BRICS group, which includes Brazil, Russia, India, China and South Africa.

The goal of joining the BRICS group is considered to be a “deep transformation” of Algeria, which until recently supplied almost 60 percent of its imports from EU countries and especially from France.

President Tebban, in a statement on the occasion, said: “The French language is booty from the war. English is the language of the world and it is time for Algerians to open up to the world.” used words.

Working at the Faculty of International Relations of the University of Vourkla in Algeria, prof. Dr. Mebrouk Kahi, in his statement, noted that Macron’s visit to Algeria passed very quickly as a program.

Pointing out that France is trying to make up for the loss with Algeria with this visit, Cahi stressed that a new vision is expected from Macron in relations with Algeria and that he must give confidence on mutual respect.

Pointing out that Algeria has established strong relations with many countries after tensions with France, Kahi said:

“At a time when the distance between France and Algeria has increased, much has changed for Algeria. Strictly speaking, during this period Algeria; He managed to raise his relations with Turkey and Italy, as well as the countries of the Persian Gulf and many other countries to a qualitative level.”

Pointing out that the details of Macron’s contacts in Algeria, which will last for several days, have not yet been leaked, Kahi said the economy, illegal immigration, visas and some regional issues could be discussed in Macron’s meetings with Algerian authorities.

“During Macron’s contacts in Algiers, the weakening of French influence in the coastal regions of Africa and the growth of hostility towards French forces in the region, as well as economic and energy issues caused by the Russian-Ukrainian war, will also be discussed,” Kahi said. he said.

Not much benefit from the visit

The former French ambassador to Algeria, Xavier Driancourt, said the current visit would not be of much use.

Speaking to the French official news agency AFP, Driancourt said: “There has been no change in relations with Algeria. There should be some indication from Algeria regarding the deportation of illegal immigrants and economic demands.” said.

Driancourt, whose term expired in 2019, indicated that Algeria had not accepted a request from the French Interior Ministry to deport illegal immigrants of Algerian origin.

The gas issue is also on Macron’s agenda

The pressure to put the gas issue on Macron’s agenda comes through news published in Europe. Fearing a Russian gas shutdown and a gas shortage, Macron is being asked to persuade Algeria to pump additional gas through Spain.

Algeria, whose relationship with Spain is strained over the Western Sahara issue, is linked to Europe by three separate gas pipelines, running to the Italian island of Sicily via Tunisia, Spain via Morocco, and a third to the Almería region in southern Spain.

The desire of France to revive relations with Algeria is contrary to all these radical changes that Algeria is going through.

After the main determinants of the normalization of relations by Algeria, it is clear that Macron will have to say more to convince the Algerian side of his new vision.

Qasemi stated that France had always viewed Algiers as its “private garden” and that this vision had taken root in them due to the great privileges granted to France during the period of former Algerian President Abdulaziz Bouteflika, and concluded his words as follows:

“The current bottleneck in bilateral relations can be overcome if France is serious about establishing calm relations with Algeria, which will never allow hostility and border crossings.”