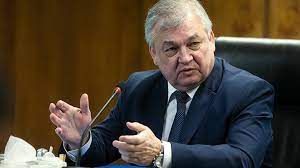 Russian President Vladimir Putin’s special envoy for Syria, Alexander Lavrentyev, said in a statement about events in northern Syria that “Syrian Kurds are being held hostage by the United States.”

Following the results of the 19th Astana talks on Syria, which began yesterday in the capital of Kazakhstan, Astana, with the participation of Turkey, Russia, Iran, ceasefire guarantors in Syria, delegations from the Syrian government and the opposition, Alexander Lavrentiev, Special Representative of President Vladimir Putin for Syria, spoke about the process, gave clarifications . Stating that steps have been taken to establish a dialogue between the Kurdish groups in northern Syria and the Damascus regime, Lavrentyev said: “We hope that the Kurdish representatives in northeastern Syria will make the right decision on the need to reunite with Damascus within Syria.

There are all conditions for this. But last month, senior Washington officials visited the Syrian Kurds several times, warning them not to take steps towards Damascus and threatening to withhold their aid. In fact, the Syrian Kurds are being held hostage by the United States,” he said.