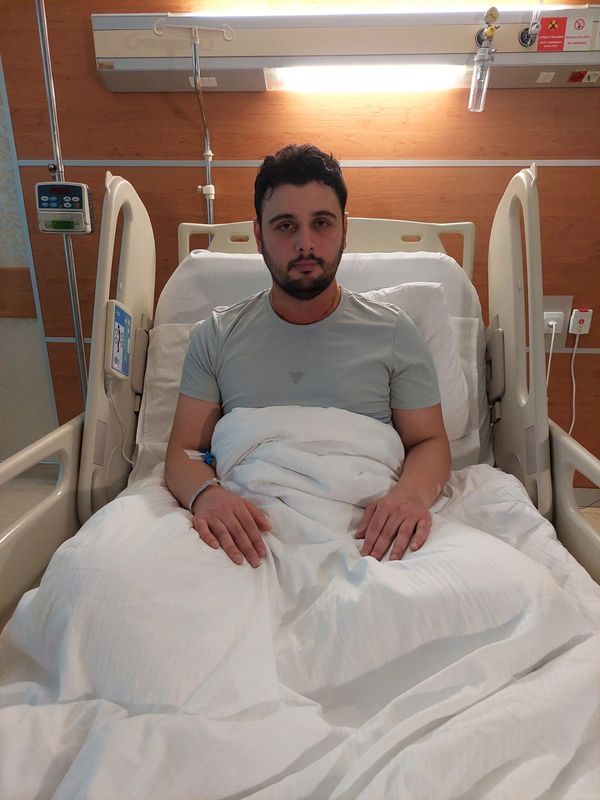 SAFAKNA TURKEY – Hussein, who lisped when the wound on his tongue was overgrown, could not say “C”, his hands were blue, and his eyes were bloodshot, said that he did not go because he was afraid of the doctor. Güvenaltun, who lost 6 kilograms in the process, has largely lost his sense of taste as most of his tongue has been removed. The young man who has returned from the dead will find it difficult to speak in the next life.

Güvenaltun, who was diagnosed with stage 3 tongue cancer, said the thing he missed the most was hamburgers after he regained his health through surgery. Güvenaltun, who has been released from the hospital, said he would start work first and then get engaged, which he postponed.

IT IS DECLARED ON JANUARY 10, POSTPONED

Hussein’s mother, Hatice Erilmaz, explained the process of the disease by the fact that it was difficult for her to speak: “My son had 2 teeth that were rotten, one was pulled out, the other became inflamed, so the doctor first treated him, and then said, let’s pull him out. My son did not go for a tooth extraction when the pain subsided. The tooth eventually broke and cut his tongue, the son did not care, because it will pass. When after 1 month the wound did not heal, we were also worried, but my son said that it would pass.

The wound on the tongue was overgrown, it was difficult for him to speak, eat, drink. He constantly took painkillers because of the pain. My son was a little careless. We were very scared, because he is young, we had no idea. He also did not drink alcohol or cigarettes. Thank God, after the operation we will feel better. We were going to get engaged on January 10, but when the wound did not heal, we went to look for a doctor. Some doctors scared us even more. Finally we met with my teacher Typhoon, he gave us hope. Luckily my son is fine now. He was a very active, restless child, and it was hard for him and for us to break away from everything. “My son is a clothing store manager, his bosses who will also be back to work, and his fiancée never left us alone during this period.”

Ear, nose and throat specialist prof. Dr. Typhoon Apuhan, on the other hand, had this to say about tongue cancer and the patient’s latest condition: “Tongue cancer occupies an important place among empty neck cancer types. If not diagnosed early and treated adequately, it can be fatal due to spread from the floor of the mouth to the neck and then to the body. Therefore, factors that cause tongue cancer should be eliminated as soon as possible. After some time, the patient has a restriction of tongue movements, pain and numbness when chewing and swallowing. In the presence of metastases in the neck, lymph nodes increase. There may be pain in the ear. Among these factors are alcohol, smoking, HPV virus, caries, fractures. Our patient had had dental problems for a long time and went to a private center for a broken and decayed tooth. While he was undergoing dental treatment, he developed a sore on the left side of his tongue, especially next to a rotten and broken tooth. After a while the patient stopped moving his tongue. We usually observe tongue cancer in people after 40 years of age. Our patient is young, he did not think that this would happen, he hesitated and did not go to the doctor.”

“THE PATIENT IS URGENTLY TRANSPORTED AND THE TUMOR TISSUE IS REMOVED”

Emphasizing that Hussein is very young, Prof. Dr. Apuhan said: “When the patient came to us, we found a red and white image on his tongue that looked like cancer. After the tests, we were diagnosed with tongue cancer, which spread rapidly. Tumor tissue was absent on a very small part of the tongue. We immediately took the patient to the operation. During the operation, we removed the tumor tissue, the cancer spread to the neck area, and the lymph nodes were cleaned there. We then repaired the floor of the mouth. We reconstructed the tongue with a flap. The operation lasted 6 hours and was successful. Our patient is healthy, we will be discharged. It is imperative to check for caries, broken teeth, especially unhealthy dentures. They pave the way for tongue cancer,” he said.

Claiming that they were planning radiation therapy after surgery, Prof. Dr. Apuhan said: “The cancer may recur, but we have cleared the surgical fields and will be watching closely. Our patient was partially fortunate that he could speak and we took most of his language because he was at high risk of recurrence. We can transfer tissue from another part of the body to part of the tongue. There will be a loss of taste. The patient can return to normal life within 1 month.

Specialist in anesthesiology and intensive care prof. Dr. Jakup Tomac said: “Such large head and neck surgeries are also important in terms of anesthesia. Since it will work in the mouth and neck area, we inserted a tube through the nose, which we call nasal intubation, and lowered it into the lungs during the operation, and continued breathing the patient. His values ​​were stable, we were aroused accordingly. Before the operation, the patient asked me if I would have severe pain after the operation. I said that you will definitely not have pain, we will create a pain relief system very beautifully. We call this patient-controlled analgesia. Using the pump, the patient himself regulates the dose of anesthetic in the vascular access. With this system, the patient had a pain-free period. We had no problems with anesthesia during and after the operation. We discharge our patient in good health.