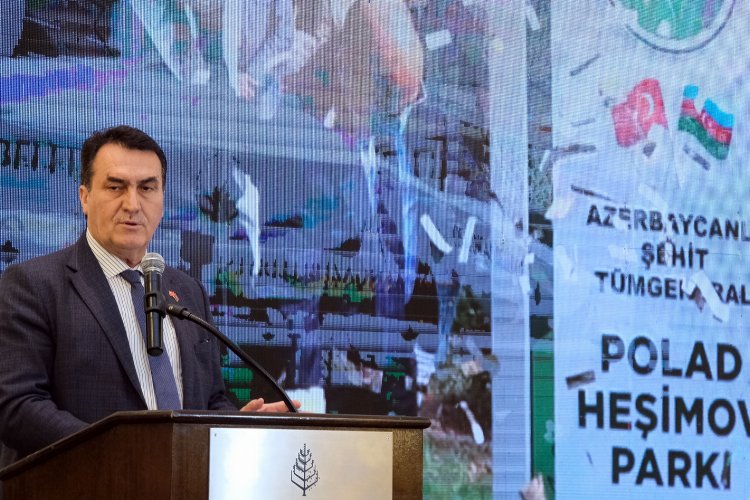 BURSA (IGFA) – At the evening of Turkish-Azerbaijani friendship, held in the capital of Azerbaijan, Baku, Turkish Ambassador to Baku, Assoc. Dr. The event was attended by Cahit Bagchi, Azerbaijani MP Ganiza Pashayeva, Osmangazi Mayor Mustafa Dundar and many Turkish and Azerbaijani investors.

Osmangazi Mayor Mustafa Dündar, who spoke at the program, which presented the opportunities for cooperation and investment of Bursa in many areas, especially in tourism, provided participants with information about the historical city of Bursa and Osmangazi. Noting that the historical mission of Bursa is to embrace all its brothers from the Balkans to the Caucasus and Central Asia, Mayor Dundar said: “Bursa is one of the oldest cities in Turkey with a thousand-year history. Due to its strategic location, it has been one of the important human settlements in all periods of history and hosted many civilizations. According to archaeological excavations, finds dating back 7,000 years have been obtained. Bursa has a lot of cultural heritage as it was the capital of the Ottoman Empire, one of the most powerful states in history. It has a living history identity with its mosques, complexes, bridges, fountains, hotels and baths. Bursa looks like an open-air museum, where every street has traces of history.” said.

Recalling that Bursa handed over the “Cultural Capital of the Turkic World” task taken over by Bursa last year to the city of Shusha in Azerbaijan in 2023, Osmangazi Mayor Mustafa Dündar said: “As the municipality of Osmangazi, we continue to strengthen our fraternal ties. with Azerbaijan every day. We are a sister municipality with the city of Sheki. We have adopted a decision of our parliament to conclude a fraternal agreement with Shusha. We keep the name of the martyr of the Azerbaijani Major General Polad Geshimov, donating a park in our Bursa. We want everyone who is in our heart to find us by their side when they are in trouble,” he said.

Noting that the brotherhood brought about by the understanding of “two states, one nation” has grown rapidly in the sphere of the private sector, as well as relations between states and institutions, Dündar invited all Azerbaijani brothers to Bursa, the city of civilization.

Turkish Ambassador to Baku Assoc. Dr. Cahit Bagci, on the other hand, said they were happy to host Bursa, a city of the Ottoman Empire that ruled over three continents, in Azerbaijan.

At the end of the program, Azerbaijani MP Ganiza Pashayeva presented Osmangazi Mayor Mustafa Dundar with a letter of thanks for his contribution to strengthening the fraternal ties between the two countries.