SAFAKNA TURKEY – Two stocks that played an important role in the growth of the Istanbul Stock Exchange also made the base for the third trading day in a row. While SASA and Hektaş are the two stocks that have the biggest impact on the index’s rise, they also make the most negative contribution to the decline. Opening today at the base price, SASA is down 27.05% since Nov. 16, while Hektaş, following the same move, is down 27.02% since Nov. 16.

According to Shebnem Turhan’s news from Ekonomim.com, Hektaş’s shares are up 622 percent this year, with an annualized return of 1,011 percent. The stock, which is up 30.5% this month, has fluctuated over the past three trading days. Today Hektaş has 34.4 million sales orders. The market value of the company fell to 95.6 billion lira in three days. Hektaş shares, which were worth TL 51.25 on November 16, are worth TL 37.40 today.

SASA, on the other hand, is one of the most talked about stocks in recent times. The share price, which has fallen by 27.05 percent since November 16, fell from 186.30 lira to 135.90 lira. SASA shares, which are up 13 percent this month, 45.8 percent monthly and 712 percent yearly, have made a 414 percent return this year. There are also 13 million bottom-up sales orders for SASA shares.

The negative impact of these two stocks on the BIST100 index is also large. Of SASA, which has a high weight in the index, approximately 29 points of decline in BIST100 is due to SASA and 17.2 points to Hektaş. The BIST100 index is currently negative at 0.88 percent. 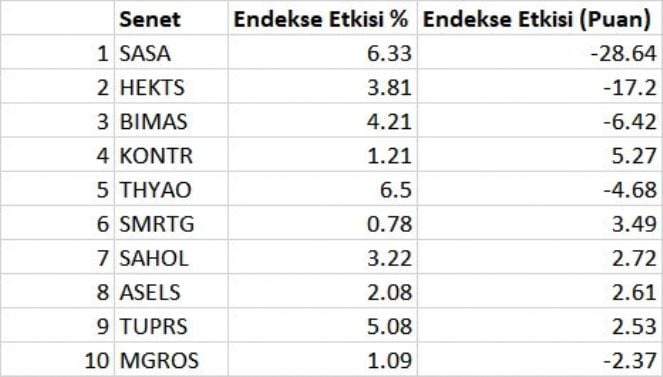