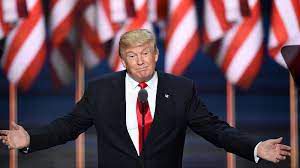 Former U.S. President Donald Trump has announced that he will run on behalf of the Republicans in the 2024 presidential election.

In his hour-long speech, Trump spoke about his accomplishments as the 45th President of the United States, arguing that the Biden administration had led the country into decline. “We have been a great and glorious nation under our leadership,” Trump said. But now we are a nation in decline. This is not just a campaign, this is a desire to save our country. The Biden administration destroyed the US economy in two years. With victory, we will once again create the largest economy in history.”

Trump’s unusually early entry into the race is seen in Washington as an attempt to get ahead of other Republicans seeking the party’s nomination and to evade possible charges in the investigations he will face.