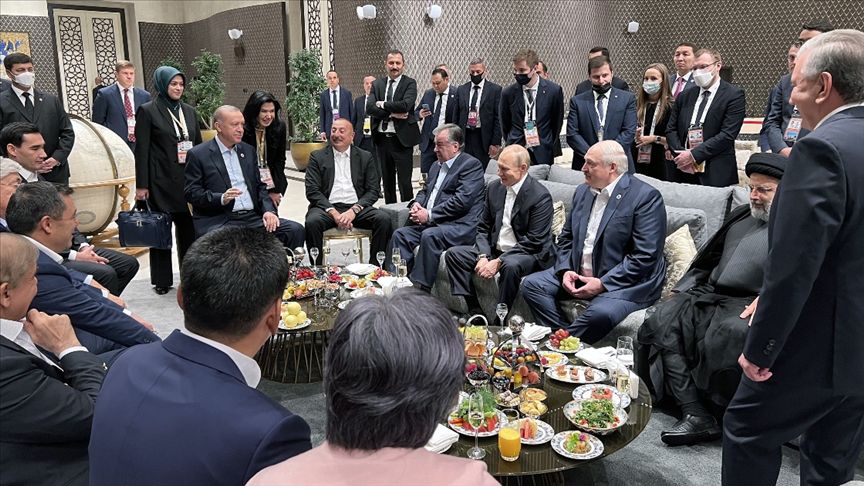 The diplomatic trip of the President of the Republic of Turkey Recep Tayyip Erdogan from Samarkand to New York for two weeks demonstrates the scale of the expansion of Turkey’s foreign policy.

One area where this growth is most noticeable is the leadership of President Erdogan, who manages foreign policy like an orchestra conductor. Both the position of the Shanghai Cooperation Organization (SCO) at the summit in Samarkand, its relations with other leaders, and the speech he gave in New York positively and clearly distinguish Erdogan’s leadership qualities from other leaders. It may not be due to the shortcomings of other leaders.

However, one of the factors that makes President Erdogan different is that he has a solid knowledge and experience that can easily set him apart. A random photo taken during a conversation with other leaders in Samarkand, the favor he encountered while marching in New York, or the diplomatic position he established in Turkevi are actually directly related to President Erdogan’s experience in the diplomatic field. and his foreign policy portfolio.

President Erdogan has held 26 meetings on the margins of the UN, except for five, all meetings at the presidential level.

Given the diplomatic traffic of recent months, it is clear that the scale of Turkey’s foreign policy is not limited to regional dynamics. The SCO is one of the most striking examples of expanding the scale of foreign policy. What makes Turkey important to the SCO is its ability to conduct global diplomacy and its ability to deal directly with events that could have global implications. His diplomacy in Ukraine has further expanded his geopolitical portfolio. First, the first contact in the framework of the Antalya Diplomatic Forum, then the Istanbul summit, the signed agreement on the grain corridor and the latest exchange of prisoners of war between Ukraine and Russia prove that Turkey is the only country that can achieve results. Apart from the negotiations that are being conducted through Turkey, there is currently no other process between Russia and Ukraine. As an additional area that showcases the diversity of his geopolitical portfolio, Erdogan’s diplomatic platform in Turkevi, located directly across from the United Nations (UN) building in New York, has reached astounding proportions. President Erdogan held 26 meetings on the margins of the UN; With the exception of five of them, all negotiations are conducted at the level of the head of state.

Among the most concrete results of the Ukrainian war and the balanced policy of Turkey, the elimination of the imbalance in Russian-Turkish relations and the growing importance of Turkey for Europe are very valuable.

Another issue is related to Turkey’s foreign policy agenda. To understand this, just look at President Erdogan’s speech at the UN General Assembly. Of course, one of the most important issues that were raised in the speech is the ongoing Russian-Ukrainian war. Turkey is one of the countries that are making every effort to end the war as soon as possible. From the interview that Erdogan gave to the American PBS TV channel, it becomes clear how delicate mediation and mediation activities are. His cautious view of both countries is very obvious. He is very careful in his words and transparently reveals Turkey’s position. The goal is to bring both countries together on a reasonable basis and provide a basis for agreements in a formula that will stop the war. That is why Turkey is not yet proposing any package of solutions that provides more opportunities for balanced diplomacy.

With President Erdogan’s speech at the UN, Turkey appears to have strengthened its mediating position. Especially the fact that the problem of the exchange of prisoners arose immediately after the UN meetings, and Ukrainian President Volodymyr Zelensky thanked President Erdogan, is proof of this. Of course, the decisions of Russian President Vladimir Putin to hold a referendum and partial mobilization in four regions could change the course of the war. However, this situation also provides an opportunity to give a new direction to Turkey’s mediation activities. Therefore, among the most concrete results of the Ukrainian war and the balanced policy pursued by Turkey, the elimination of the imbalance in Russian-Turkish relations and the growing importance of Turkey for Europe are very valuable.

President Erdogan’s insistence on UN reform is also a very important topic, demonstrating the global scope included in Turkey’s foreign policy agenda. Of course, this call is not new and comes not only from Turkey. President Erdogan has long called for a reform of the UN Security Council. Because the institutions of global governance, especially the UN, face a complex problem and cannot find a solution to overcome these problems. The grain corridor was put on the UN agenda by Ukraine in March 2022, but the UN could not take any concrete steps in this regard. The solution became possible only thanks to the efforts of Turkey. This situation alone is enough to cast doubt on the effectiveness of the UN. Therefore, only reform, in which the General Assembly will work more effectively and the Security Council will change its structure, can allow a joint solution of acute global problems.

In addition, President Erdogan’s statements on Syria show that Turkey is committed to a solution that must be found on the UN axis. In other words, by reiterating that a solution must be found within UN Security Council Resolution 2254, President Erdogan emphasizes the importance of protecting Syria’s territorial integrity, writing a constitution, and stabilizing Syria through fair elections. The focus on terrorism and Turkey’s fight against terrorism is not limited to Syria, Iraq or the PKK/YPG. Although the decision he put forward on the issue of Syrian refugees from the rostrum of the UN will not completely solve the problem of refugees, it shows that Turkey has a policy of returning refugees to its lands. With the construction of 200,000 houses, 1 million Syrian refugees will be able to return, as President Erdogan said, only with international support.

When we look at other foreign policy topics, it becomes clear how increasingly diverse Turkey’s foreign policy agenda is. Iraq, North Africa and the Eastern Mediterranean, normalization of relations with Libya, Palestine, Israel, Iranian nuclear issue, Azerbaijani-Armenian conflict, Kashmir issue in the context of Afghanistan, Pakistan and India, Rohingya Muslims, Xinjiang issue in the context of China’s territorial integrity and one understanding China, The pursuit of good neighborliness in the Balkans, the Aegean and the Eastern Mediterranean, Turkey’s call for a two-state solution in Cyprus, European Union (EU) discriminatory policies, NATO and Euro-Atlantic security, Africa, Latin America and Islamophobia Such issues like declaring a hate crime against humanity show how intense Turkey’s foreign policy is. It is clear that several concepts are actively used in all the names. Peace, stability, justice and diplomacy. President Erdogan’s efforts are clear: we have huge, destructive tasks ahead of us; let’s solve these problems peacefully, with diplomacy and justice, without wasting time.

It would be incomplete and incorrect to describe Turkey’s foreign policy, stretching from Samarkand to New York, as “oscillation between two different poles.” Turkey does not want world politics to get stuck in a narrow geopolitical corridor in the face of upcoming global upheavals. The only way out of the narrow corridor is to abandon the distinction between us and others, remove the global system from the dichotomy between West and East, and accept the fact that a multipolar world has arrived.